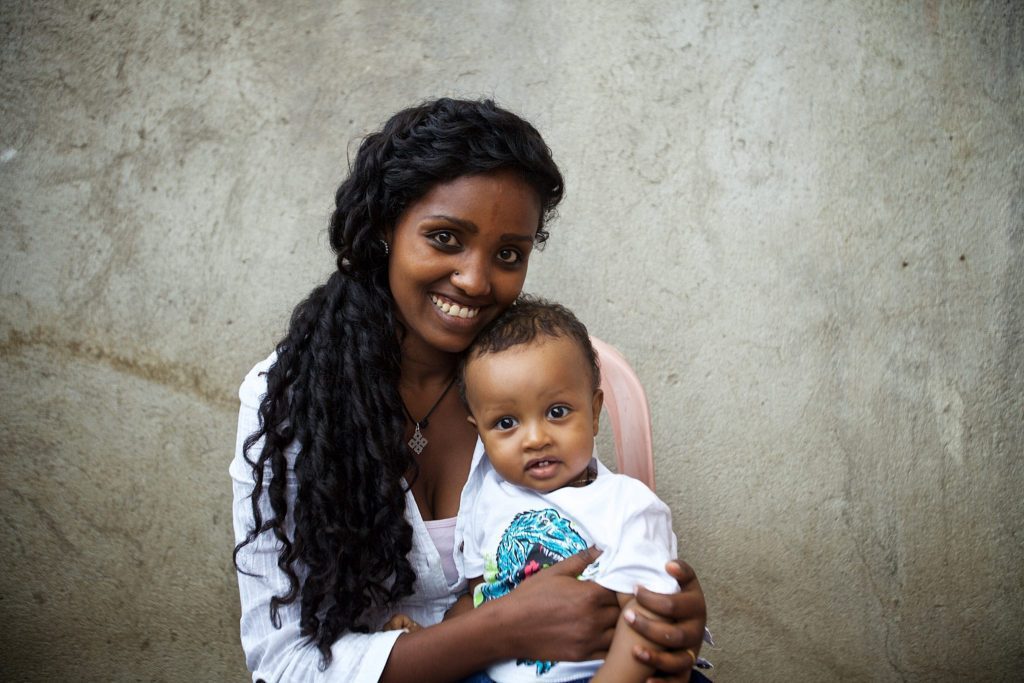 Anyone who knows Elisa will tell you that her beautiful smile is a perfect reflection of her heart.
At the age of twenty-six, Elisa is celebrating three years of marriage and the proud mom of a three year old son. Elisa loves her job as a nurse and social worker for the Adera Foundation, giving hope and help to the single moms who are the focus of Adera’s ministry in Addis Ababa, Ethiopia.
Elise’s life did not always look this way. Her past is a reminder that God can be writing the story of our greatest joy while we are lost in the chapters of our deepest pain.
Elisa’s father died before she was old enough to know him, leaving her mom unable to provide care. Soon, Elisa found herself living in the home of an aunt who was struggling just to care for her own children, much less little Elisa. Ultimately her uncle pushed for Elisa to be put in an orphanage, so at the age of nine, Kechene orphanage became her home.
Growing up in an orphanage, Elisa witnessed many of her friends being adopted from Kechene. She was happy for them but longed for a family of her own.
So far, the chapters of Elisa’s story contained so little love, joy and hope. But during this time, God was writing a story on the other side of the world that would lead to a life filled with purpose and meaning for Elisa.
Joe Robertson and his wife Caren had experienced the American dream of financial independence and freedom through a very successful construction business. Approaching retirement age, Joe and his wife had every reason to look forward to their golden years to be full of travel in some of the more spectacular places on earth. Spending time in the harshness of a Third World country like Ethiopia was not part of the plan. But God was writing a story for Joe and Caren that they never could have imagined. Joe never dreamed then that one trip to Ethiopia with his friend Scott would lead to transforming lives in a country full of poverty and deeply rutted dirt roads.
Joe’s Bible study friend Scott is the CFO of Gladney Center for Adoption, one of the most successful adoption agencies in the U.S. Scott had been working on establishing relationships with orphanages in Ethiopia for the purpose of finding homes and families in the U.S. for children like Elisa.
Through the persistence of Scott and the wholeheartedness of Joe’s wife Caren, they made the trip to Ethiopia in 2006. Joe’s and Caren’s lives were forever changed by what they experienced.
Joe will never forget the moment when he was standing there in Kechene and felt the small hand of a girl slip into his large strong hand. Glancing down, he could not see the girl’s face who stood beside him. He could only see that her gaze was on the floor. Surprised by this, Joe asked a worker what the girl was doing. The worker’s response to Joe’s question was, “She likes you”. Elisa’s expression of love was the foundational moment that guided Joe and Caren into a life that neither could have imagined. After returning to the U.S., Caren wrote letters of encouragement to Elisa that gave her hope. Elsa says that it is those letters that allowed her to believe in herself and dream of a life of serving others. A life filled with purpose and meaning.
From that moment when Elisa slipped her hand into Joe’s, Joe has had a heart for Ethiopia and its people. The work began in Guncherie with the construction of additional space in an orphanage and ultimately led to the founding of the Adera Foundation, where Elisa now works.
As a nurse and social worker for Adera, Elsa has experienced a joy she never thought possible, showing love to children whose lives began so much like hers. Elisa has used her experience with loss, pain and brokenness to pour out love and empathy to those who grew up much like herself.
Turning our loss into love transforms our lives and how we live them.
Elisa’s story inspires us to have faith and be patient during those times when our hearts are broken and we feel hopeless. Elisa’s story is one of loss, betrayal and pain. Yet it’s also a story of God’s most beautiful work, not only in her life but in the lives of those who became a part of her story.